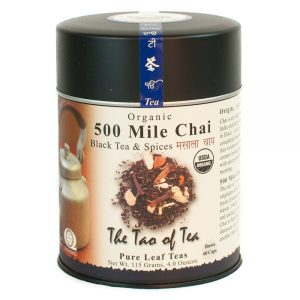 Company: The Tao of Tea

The tale of ‘500 Mile Chai’ originates from the many late night truck drivers stopping at small Chai stands, ‘Dhabas’, on the highway and asking for really strong, sweet Chai to help them drive “for another 500 miles.”

Chai is an integral part of life in India and simply translates to ‘Tea’ in Hindi. In India, ‘Chaiwallahs’ (tea vendors) are present at street corners, brewing basic black tea with spices.

The grade of tea commonly used for Chai is known as ‘Cut, Tear and Curl (CTC)’, heavily rolled black tea leaf with very low moisture content. We hand blend the black tea with organic spices – ginger, cloves, cardamom and cinnamon. It is ideal for boiling, the traditional way to make Chai.

Once the leaf has been optimally boiled, adding milk and sugar provides a delightful golden glow.

Chaiwallahs in India offer Chai in simple kettles and small tapered glasses. ‘Kasoras’ (Chai Cups) made of low fired clay are also famous for imparting a distinct earthiness to the brew. After drinking, people will typically throw away the kasoras.

I picked up this tea while ordering Chrysanthemum tea from the Tao of Tea website. I am a fan of the company as I have visited their tea house at the Lan Su Chinese Garden in Portland, Oregon. I wanted to try something new and decided to add this tea to the order as it is fall and a chai sounded good (even though it’s still in the 70-80s here in Phoenix).

I prepared the tea in two different ways. First, I prepared it like a traditional black tea with no milk or sweetener. As most black teas, it was bitter and astringent but with a grounding feeling with the chai mix. The cardamom was noticeable, but not strong like many teas (including my own). The other taste that stood out to me were the cloves, and while it was a little pungent with the spices, it almost had a smoky taste, although it was very slight. The ginger and cinnamon are also present but a bit calmer than the other two herbs. Adding a little honey, sugar, and cream would make the herbal tastes pop more and suppress the bitterness of the black tea I believe, making it perfect for those cool autumn mornings.

The other way I prepared was using the Chaiwallah Brew that is on the back of the tea container. I have never prepared a tea in that way before so it was quite interesting. I used whole milk and no sweetener. I think next time I will add a little less milk as it seemed to over power the drink. The spices do still stand out without the bitterness of the black tea, but the fullness that is black tea was still there. The creaminess of the milk really changes the feeling of the tea as now it feels like a gentle warm grounding versus a hard grounding that cardamom and black tea seem to do. This preparation feels like it could be a good afternoon pick me up and unwind whereas the traditional black tea preparation felt more like a morning tea.

To conclude, I think this is a wonderful tea for the autumn months. It is gentle in the herbal chai flavor, and with the Chaiwallah Brew, it could be a great afternoon preparation.

Fox Craft Apothecary is a small business based in Phoenix, Arizona. Coming January 2020, Fox Craft will be selling products including herbal teas, salves, bath salts, and dream pillows. Local classes and consultations will also be offered. Be sure to check out the blog to get the latest reviews on books, tea, and much more. Along with these, there will be monthly herb report giving data on the traditional, medical research, and spiritual uses of that month’s featured herb.